Gone are the days when SUV were conventionally large and not very attractive. The present day SUVs are no less than sedans in terms of comfort and stylish as well. We have the likes of Mercedes, BMW and Audi, the three most popular synonyms of luxury according to the Indian automotive dictionary.

One such example of a small but strong SUV is the Audi Q2, which is presently the smallest SUV from the German automaker’s gallery. Since, it is small in size, it does not have a strong rival in its segment which makes it one of the better options to choose. The Q2 also falls to be the entry-level product to Audi’s world of SUV. 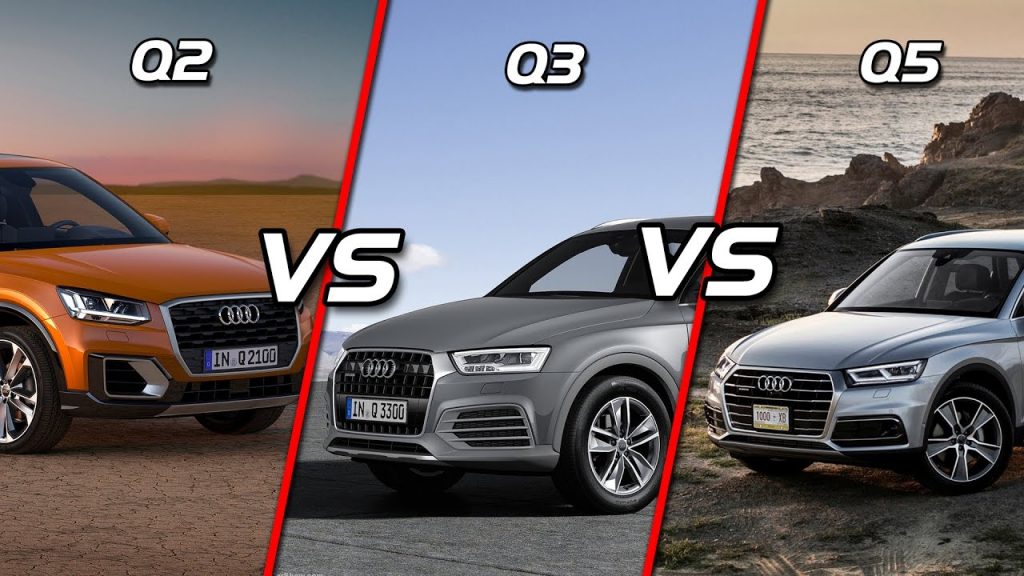 The Q2 sets up the Audi range perfectly for the bigger Q3 and Q5 to follow. The Q3 is bigger (bigger than the Q2 at least) and is based on the previous generation A3 sedan. It is with the Q3 that Audi starts facing real competition from the arch nemesis BMW X1 and the stylish Jaguar Land Rover Evoque. Similarly, the bigger Q5 is based on the A4 sedan and competes against the Bigger Land Rover Discovery and Discovery Sport.

The Audi Q2 is small but has certain styling cues that might even make you think that it is better than the Q3. The Q2 is around 8 inches shorter, around 4 inch slimmer and 4 inch lower in height than the Q3. The Q2 has a big bold front grille with checkered slats. The headlamps are sleek and angular. The car also has a sculpted body and thick panel on the C-pillar, behind the rear door window. The receding roofline is carried to the rear as well. However the biggest drawing factor at the rear is the faux skid plate on the rear spoiler.

The Audi Q3 has a bigger hexagonal grille and a sleek headlamps panel. However, the headlamps are much straighter and not angular like the Q2. The sculpturing is almost the same as the Q2 but is more muscular. There are additional cladding all around the lower profile of the car and on the wheel arches. The rear section on the Q3 is what makes it far better than the Q2. The horizontally triangular tail lights are stretched towards the centre and not a round-ish chunk. The light are neither conventional nor split. Instead, the entire set is placed on the bootlid.

The Audi Q3 is the biggest of the lot and has a big hexagonal grille doing the bulk of the front styling. It is outlined by a strip of chrome all around. The headlamps are the sleekest of the lot. Moreover, there are many physical traits that has been improved to make it look better. The previous generation looked plain and simple and was not something that you would remember afterwards. But the new generation is equally in line with the company’s designing and is muchsculpted. And if you think you liked the Q3’s rear panel, you will almost love the Q5. It has a distinct appearance and is simply ‘wow’. The horizontally stretched tail lights are more angular than Q3. Interior styling

For a brief moment, you will feel that the interior of the Audi Q2 is a simple ditto carbon copy of the A3. It is somewhat that way it self. You get an optional “Audi Virtual Cockpit” along with the traditional analogue dials. There is a 4-spoke steering wheel with mounted controls. There is also the latest Audi’s MMI infotainment system that is placed as a pop up unit on the dashboard. Moreover, considering the overall size of the car, the interiors are spacious and this is carried to the 405 litre boot space as well.

The Audi Q3, on the other hand, is not as appealing as the Q2. Reason – it is from an older generation than that of the Q2, which is new and fresh. The Audi Virtual Cockpit and all the other funky buttons and touches are not quite there. However, there are far more detailing on the instruments cluster than the Q2. The boot space is marginally bigger than the Q2. The boot is 420 litres with the rear row up and a big 1,325 litres with the rear seats folded.

The Audi Q5 has been designed in a way keeping in mind the needs of a family. The Q5 is the most spacious SUV among the three and has ample legroom as well. However, the front dashboard is not very big attractive and might look like any regular feature-rich car. The boot space is very good at 460 litres along with which, you get an option to adjust the seat legroom. Once the seats are adjusted to its extreme, the boot space increases to 540 litre.

The Audi Q2 is available in both petrol as well as diesel engine options. The top variants are expected to get 2.0-litre turbocharged engines with manual as well as automatic gearboxes. The top-end model is capable of hitting an acceleration of 0-100 kms per hour in 6.8 seconds. Buyers can also choose between two wheel andan all-wheel drive mechanism. So this would make it suitable for any buyer.

The Audi Q3 also comes with both petrol and diesel engine. The top grade diesel engine comes with a 2.0-litre engine which makes a maximum power of 184 bhp at 3,500 revs per minute and a highest torque of 380 Nm at 1,750 revs per minute. This engine is coupled with a 7-speed automatic transmission gearbox. An All-Wheel Drive mechanism makes it a safe bet even on tough roads.

The Audi Q5, the best of the lot, does not have a very powerful engine (at least not more powerful than the Q3). The premium grade of the car gets the same 2.0-litre diesel engine mated to the same 7-speed automatic transmission. However, the Q5 is probably the most refined model out of the three and has a firm ride quality. This may have caused the engine to make a power of 174 bhp at 4,200 revs per minute, which is lesser than the Q3. The maximum torque of 380 Nm comes at the same 1,750 revs per minute. If you look for a firm drive on off roads, look no further than the Q5. The refinement and the AWD really helps a lot on tougher roads.

Get all set to defy the regular norm that says, “the bigger the better”. Look at the Audi Q range. The new Q2, the smallest Audi SUV, is probably the sweetest of the lot. The designing is at par with the rest of the SUVs by the company. However, it is the interiors that will draw you closer to the Q2. Audi has done really well to keep it feature-rich even at a very entry-level price. If you are a first time buyer, the Q2 is what suits you the best.

But if you need power, just like the youth would want, the Q3 and Q5 comes to the mind first. They are bigger and therefore suits the people who are already experienced in owning premium cars.

In terms of price, the Q2 and Q3 (ranging between Rs. 30 lakhs to Rs. 35 lakhs) are way more affordable than the Q5, which is priced at around half a crore exclusive showroom price in Delhi. Moreover, it is not even a proper justification for its price as the Q3 comes at a much lower price but still has equivalent features.