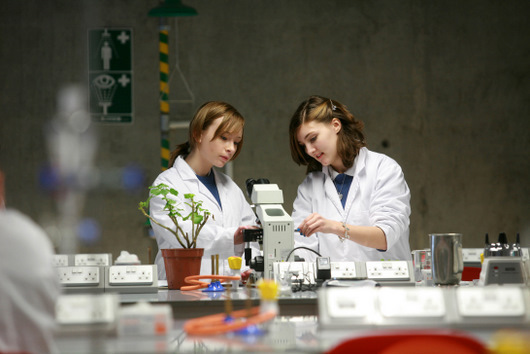 Biology is simply described as the science of life. Projects for a biology science fair project can range from studies of human, animal or plant life. There are many difficulty levels available for these projects depending on the grade level of the science fair. For a student to do their best job, they should pick an area of biology that most interests them and is at their appropriate level.

One of the easier, yet time consuming projects, involves plant growth itself. Whether starting from a seed or a young plant the factors involved in the plants growth can be monitored over time. The student should have multiple seed starts or similar young plants for this project. By recording the amount of growth and comparing it to different amounts of watering and sunlight the student will have a project for an easy level science fair. To add difficulty levels, results can also be recorded for the addition of fertilizers and even documentation of soil ph levels. The environmental temperature can also be studied and recorded. Photo documentation for this project will add to the overall effect for the final display. While portions of this type of experiment can come under the category of chemistry the results are of plant biology.

One of the easiest human biology projects involves a study of the sense of smell. This project will require several volunteers and should be well documented unless the student has the opportunity to present the complete project during the science fair. Have a variety of different sample foods available, chocolate, bread, onions and buttered popcorn are only a few ideas. Choose foods that are known for a strong smell. Also provide a set of nose plugs for each volunteer. Record each participants remarks of how each food tastes without a nose plug and then have them try the same foods with their nose blocked from a sense of smell. Analyze the differences that are reported.

Another human study project could be determining how room temperatures effect a participants ability to concentrate on a task. Have several paper tests available, math or reading being the best type, and have them all about the same level of difficulty. Have your volunteers each take one test in a normal room temperature environment and then repeat the testing at both a higher temperature level, about 90 F. and again at about 58 F. To increase the difficulty level of this project add in results of testing in a very noisy room environment or low lighting levels. There are many ways you can obtain different data in how environment can effect test results.

Many science fairs have rules regarding animal biology projects so be sure to check for any of these requirements before you begin. A variation on a mouse in a maze experiment would involve the differences found by comparing a mouse and a rat or other rodent in how quickly the maze becomes learned. By creating a maze with a food reward to be found at the end you should record the time taken for the mouse to reach the reward. Repeat this experiment several times and then again a day or two later. You should be able to graph the differences in time taken to see how well the mouse learns to navigate the maze. Perform the same experiment with a rat or other rodent and record the results. Does your data show any difference in the learning levels between your two subjects?

There really are a large number of ideas available for biology science fair projects. You only need to keep in mind the difficulty level, the students best area of interest and what supplies or subjects are available for the project. If you are planning a mouse in a maze experiment you might also want to remember to keep the mouse contained at the science fair. Loose mice do not tend to add to the points scored.