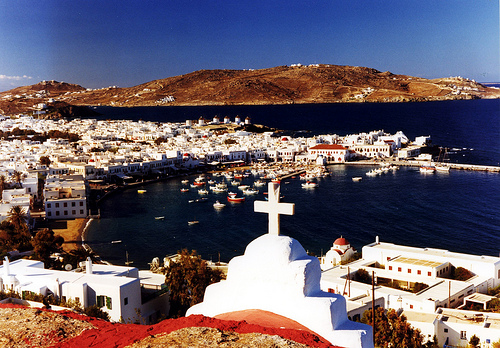 You can’t leave Mykonos without enjoying some of the most popular dishes in the Island. Some of the best delicious Greek dishes to enjoy include Pastitsio and Moussaka that is oven baked Gyros and Souvlaki that are roasted meat mainly chicken or pork. They are roasted mostly on pita bread using the most famous tzatziti sauce. In case you have a problem with food, you should eat Greek cuisine as it is well known for its appetizers, Meze. The appetizers include cheese, some types of meat or other delicacies that make a delicious “mixed dish” referred to as Pikilia. You will also be served with ouzo, which is the best traditional Greek drink.

Where to get the Best Delicacies in Mykonos

Mykonos has many places to eat some of the Greek delicacies. The Island is usually full of restaurants that have experienced and great chefs who prepare traditional meals. You will find cuisine here from other countries like Britain, China and Italy. If you are looking for the best place you can enjoy Greek delicacies, Mykonos Town is your right place. You will find many ouzeries, restaurants and cafes that serve different types of delicacies. Some hotels in Mykonos charge low rates for their services to accommodate visitors with budget constraint. Prices vary considerably and it is always good to check the menus of various restaurants to save money for more delicacies.

Mykonos is a good representative of the famous Greek gastronomy and you will find a variety of appetizers such as Ksinotira, Kopanisti, Louza and sausages. You should not miss these appetizers. Generally, Kopanisti is a type of cheese produced from homegrown animals’ milk. It is famous for its great as well as spicy taste and also its strong aroma. The appetizer accompanies wine or ouzo. It is actually the most delicious food in Mykonos. You should start by looking for the best Mykonos luxury hotels that prepares the best dishes. One suggestion is to book your holidays on the wonderful Mykonos Theoxenia Hotel.

Other delicacies to enjoy in Mykonos are local louza and sausages. Louza is a popular delicacy in Mykonos and it is produced usually from a cooked pork meat normally with pepper, salt and other spicies. Louza is served in red roasted slices. For dessert, you should try the amygdalota, with their best aroma. You should also not miss the famous soumada, a traditional non-alcoholic drink for refreshment. There are many restaurants and cafes to find the Greek delicacies. You can also look for a Mykonos hotel that serves different kinds of delicacies.