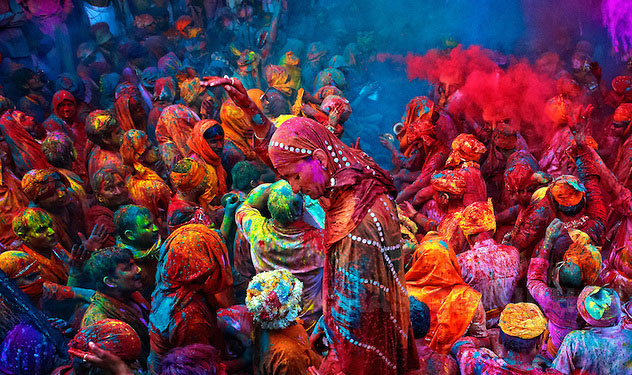 The vibrant state of Rajasthan has many folks and festivals to celebrate and Holi is one of the most colorful festivals celebrated in the state and all over the country. The Rajasthani’s love for color and cheerful celebrations is seen in the vast rituals and cultures with which the state is covered. This festival is celebrated with lots of energy and extreme enthusiasm. Holi is the festival of colors; people love to drench each other with waters and colors. The colorful festival comes on the full moon day in March. Holi in Rajasthan is celebrated as same as in Mathura. Apart from Holi, there are also the traditional fairs like animal fairs, religious fairs, elephant festivals, camel races etc.

In the season of March, a night before the full moon is celebrated by gathering of people where they light huge bonfires to burn the leaves and twigs of the winter. People play with color (gulal and kumkum) and water and hug each other.  Singing and dancing on the traditional beats of dhol add charisma to the occasion. On the occasion of Holi, even the royalties of the state shows the spirit of togetherness and enjoy every moment of the occasion cheerfully. On this day, the Rajput royals show their skills and proficiency of horse riding. In fact, the royals also drench each other in colored water.

One of the eye- catching event takes place during Holi is the Elephant Festival. It is a distinctive event held every year in Jaipur, the capital of Rajasthan. The elephants are groomed stylishly with glittering gold, perfectly matched jewels with the cloths to entertain the enchanting and enthralling audiences. The elephants moves elegantly, run races, play the regal game of polo before the alluring audiences. Some of the main features of the event are elephant parades, elephant races, elephant polo matches, elephant beauty pageant and elephant vs. man tug-of-war. The most beautifully decorated elephant is awarded at the festival.

The Elephant Festival starts with the remarkable convoy of the elephants painted and awesomely attired with the glittering ornaments and embroidered profiles. During Holi, there are deadly and ferocious elephant fights can be seen in the Chaugan or polo field. The atmosphere of the polo field fills with the echoing of the trumpet and man chanting. A ceremonial procession is recreated with caparisoned elephants, lancers on horses, chariots, camels, cannons, and palanquins. The gigantic elephant among the others is the centre of attraction in many races and beauty pageants.

The game of Polo is the main highlight of the festivals as the players are dressed in saffron and red turbans, playing with long sticks and a plastic football. The glimpse of this festival is really action-packed. From time immemorial, the elephant has been a symbol of strength and wealth. For the Royal Rajputs, the elephants were meant to be the special significance not only during war but also during the royal festivities. The attention seeker of the show is the Nishan- Ka- Hathi, the flag carrier who led the march. During the festive time, special programs such as hunting, elephant fights etc. are organized to entertain the royalties. Jaipur was a favorite destination since the ancient times and the royals used to have the elephant rides up to Amber Palace. Even today, the mahouts take tourists up to the Amber Palace on elephant back.

The Elephant Festival of Jaipur has become a main event to grab the attention of the tourists. Every year on the day after the colorful festival Holi, the old stadium at Jaipur, the Chaugan, marked as the venue for the event. Tourists enjoy this action packed enchanting event with great anticipation.