These are the venues that are home to the best teams and the greatest games. We’ve cast our eye over the stadia and grounds that have something that sets them apart from the rest, whether it’s their architecture, atmosphere or unique history.

We’ve decided to exclude historical landmarks in favor of more modern buildings, as well as golf courses, as they aren’t quite a physical venue that meets our criteria.

Football is essentially a religion in Brazil and the Maracanã is the Brazilian football fan’s place of worship. It was the largest stadium in the world when it opened in 1950, seating nearly 200,000 people. A recent renovation has taken it down to a still very respectable 79,000. Named a national landmark in 1998, it’s hosted numerous impressive events, from Pelé’s 1961 gol de placa to Germany’s victory in the World Cup of 2014. A stadium featuring an unbeatable historical vibe and unparalleled atmosphere, it will further its already considerable prestige when hosting the opening and closing ceremonies of the 2016 Olympics, as well as football matches during the games. 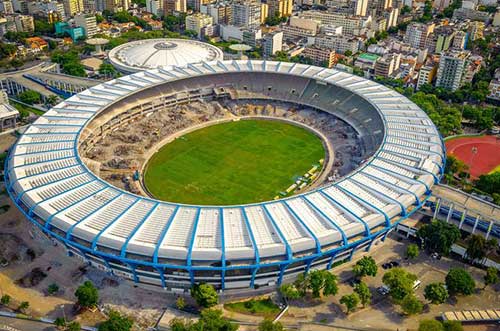 Otherwise known as “The Frozen Tundra,” this is the home of the Green Bay Packers and the oldest continually used stadium in the NFL. Opening its doors to fCheeseheads in 1957 as City Stadium, it was the first modern venue created specifically for an NFL team. Named after the club’s late founder, Curly Lambeau, those who run the stadium have managed to resist the temptation of selling the naming rights to the stadium, unlike many other venues. As the games at the site are consistently sold-out, you’d do well if you got tickets tickets to any game. If you are so lucky, be sure to watch for the legendary “Lambeau Leap” in celebration of a Packers’ touchdown. 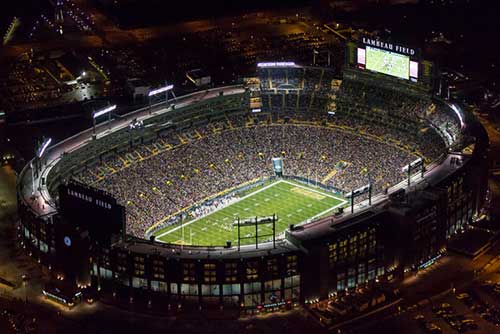 Playing host to the most famous race in NASCAR, the Daytona 500, this monster venue packed in almost 150,000 thrill-seeking spectators at its peak, although recent renovations will provide flexible seating between 101,000 and 125,000. But these $400 million renovations will drastically improve the experience for the fan, with more comfortable seats and better amenities. The speedway features a track that can be configured in several ways. For ardent fans, the Fanzone allows a more “up close and personal” experience of the races. 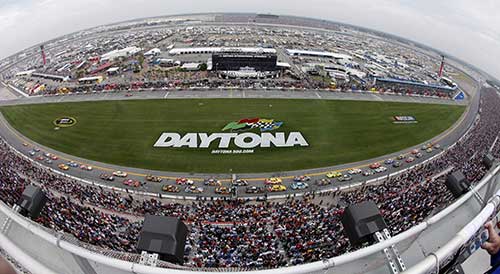 More commonly known simply as Wimbledon, this is the venue of the only grass-court open championship in tennis. The Club features dozens of playing courts, 19 of which are the classic and now rare grass variety. The famed Centre Court is the world’s fourth largest tennis venue and features a translucent retractable ceiling to let light in and keep rain out. In keeping with British tradition, players must wear white and the usual food court offering is a bowl of strawberries and cream. The palpable sense of British tradition and ceremony gives the Club a very special atmosphere that you should experience at least once. 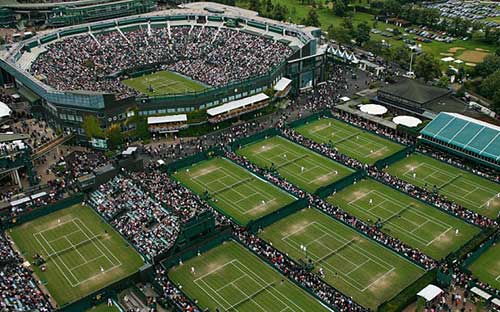 Appropriately dubbed the “Home of Football,” Wembley is the base for the national team of the country where the game was perfected. The towers of the first Wembley were iconic and the arch of the new stadium, finished in 2007, is a prominent part of today’s London skyline. It hosts the biggest matches in the English domestic game, as well as many huge international fixtures. The old stadium, torn down in 2002, played a huge role in English football. The greatest praise the new version can receive is that it continues the legacy that the old ground laid down. 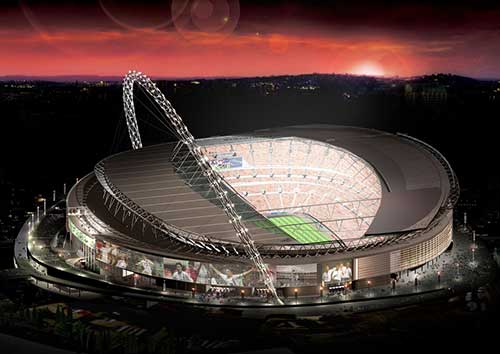 Touted as “The World’s Most Famous Arena,” MSG stands out even among the many other famous landmarks in NYC. Although frequently used for concerts, basketball, hockey and even boxing fans know it as the home of the NY Knicks and NY Rangers, as well as the site of many historic boxing bouts. Several other structures bore the name before the current stadium was built in midtown Manhattan in 1968. 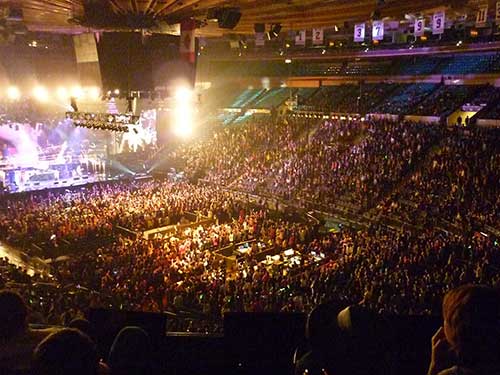 It’s had a couple of different names since it opened in 1914, but it’s pretty much always been the home field of the Chicago Cubs since 1916. As the second oldest major league ballpark still in use, it’s brimming with features that would never be seen at a modern stadium: the ivy-covered walls are famous, and the hand-turned scoreboard is one of the last of its kind.

The bizarre winds and impressive views of the city are also among the many legendary features that make Wrigley unique. While some newer stadiums like AT&T Park in San Francisco and Camden Yards in Baltimore have sought to replicate the old feel of ballparks like Wrigley, nothing matches the original. And yes, it’s named after the chewing gum maker. 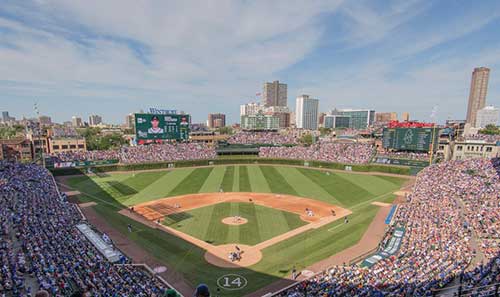 It’s fitting that Europe’s largest stadium houses one of the greatest football clubs in the world: FC Barcelona. Aside from having a committed local fanbase, La Blaugrana attracts spectators from across the globe who travel to the concrete monolith to see the likes of Messi, Suarez and Neymar. With a capacity of almost 100 thousand, Camp Nou is frequently used for some of the biggest games in Europe.

And, as Santiago Bernabéu Stadium is significant for those in Madrid, Camp Nou is an integral part of FC Barça’s Catalan identity and is much more than a mere stadium: you have no idea how stunning it is to hear 100 thousand people sing the FC Barça anthem whenever the team walks onto the pitch.

Dubbed the “Theatre of Dreams” by club legend Bobby Charlton, the ground at Old Trafford is as much a tourist attraction as it is the home of the most successful club in English football, Manchester United. Although the atmosphere may not be what it once was, this stadium can pack in 76,000 fans and is still a must-visit for any fan of English football. The ground has seen some of the greatest players and teams grace its turf. But during Sir Alex Ferguson’s historic 27-year reign, the ground earned its reputation as an indomitable fortress. 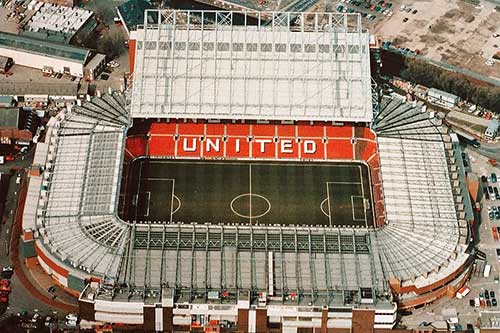 Just surpassing Wrigley Field as the quintessential American ballpark, Fenway’s history cannot be matched by any other venue in the USA. By capacity, it’s actually one of the smallest parks in the MLB, but that pales compared to the history that the home of the Boston Red Sox has developed over time. “The Lone Red Seat” is a symbol representing the longest home run ever hit at Fenway (at 502 feet), and the wall known as “The Green Monster” dominates left field. The park is on the National Register of Historic Places, meaning that features like “Pesky’s Pole” and “Duffy’s Cliff” will forever be part of American history. 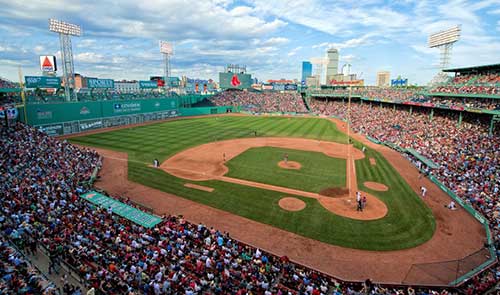 Are you agree about this list? My Sport Live Stream – Best All Sports Live Streaming Free On Ipad, Mac, PC without VPN. Just connect internet with your smart device and enjoy free sports live streaming for free.

David Hanley is a film critic and culture junkie. He’s analysing life – one frame at a time.