Get To Know Bergamo: TOP 5 Places To Explore 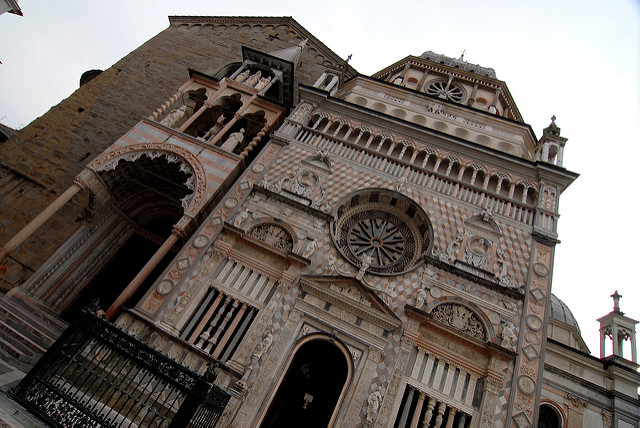 Bergamo is worth visiting, venerable, but unknown. This is true! There are many underexplored sightseeing attractions here. Perhaps, this is a fault of a “next door” Milan, famous of its shopping, Duomo and La Scala. To right a wrong, there is a big necessity to describe TOP 5 city sights you should not miss in Bergamo.

The city is conditionally and certainly divided into three big districts: the Old City (Citta Alta), the New City (Citta Basso), and the Fortress (Citta Fortezza). Traditionally, all touristic routes, describing the most of Bergamo sights, start from Citta Alta architectural complexes. It is situated on a high hill up to the defensive walls. 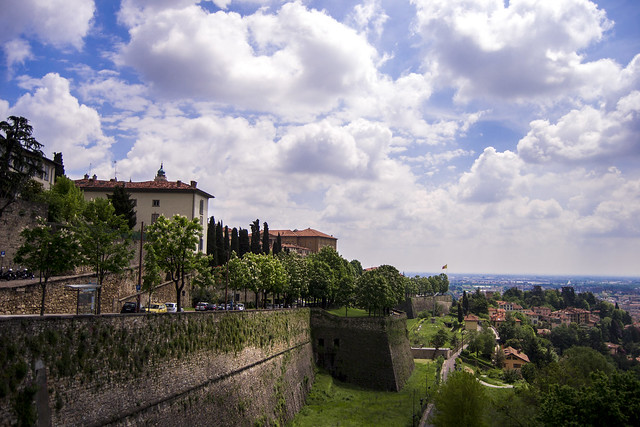 The emerald dome of a church rises predominate over the city in the very center of Citta Basso. This temple has its own history. The appearance and interiors are worth admiring. Actually, Santa Maria delle Grazie is the first architectural complex, which comes touristic way the first, just from the railway station. The church was built in a place of the old Franciscan chapel, dated the 15th century. It was destroyed in the beginning of the 19th century. The courtyard, surrounded by galleries, is all that could be saved.

Finally, the restoration works were successfully finished. In our days the ancient church looks like an exciting neo-classical building with a hard-hitting doorway, surrounded by massive columns. The interiors of the church are decorated with the ancient fresco paintings, dated of the 18th -20th centuries.

The view of a Middle-Aged city, surrounded by fortress walls is not a usual picture of Italy. Frankly speaking, the Old City is also famous of such fortification structures, as la Rocca di Bergamo, Forte San Marco and Torre dell’Adalberto. The general length of the fortress walls is about 6200 meters.

The walls were built in 1588 by Venetians. To raise the walls it was needed to destroy more than 250 civil buildings and 7 churches. When the fortress building was completely finished, it included about 14 bastions, 2 platforms, 32 watch-towers and more than a hundred cannon ports. Nevertheless, in 1797 the city was captured by Napoleon’s forces. The beautiful view of the city and suburbs can be noticed just from the fortress walls and open areas. 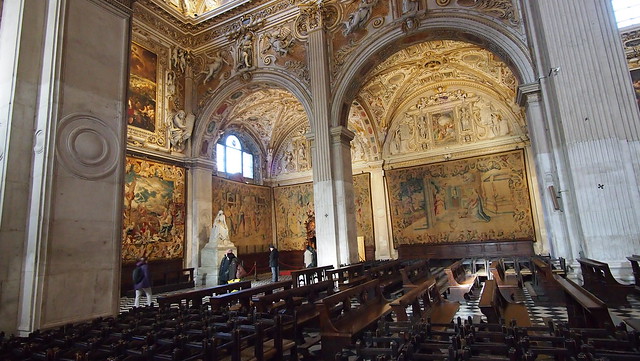 Each of Italian cities has its own Duomo, built in honor of the patron saint. Duomo di Bergamo was firstly mentioned in the 4th century, in 585, when the city was captured by Christians. Duomo of our days is a new building, as it was rebuilt in the 17th century in the territory of ancient Duomo. The interior of the cathedral is decorated with the works of well-known prominent artists – representatives of Italian baroque and mannerism.

Just few people know that the church has one more informal name – the less popular but full of sense – Chiesa di Sant’Alessandro in Colonna. The column is considered to be a place, where the saint was beheaded.

The little Cathedral Square contains a big amount of interesting and historically important city sights: baptistery of the 14th century, the Church of Santa Maria Maggiore and Capella di Colleone.

The church building was blessed in the 12th century. It was rebuilt and extended for many times. The first thing you can see in this territory is a big number of ancient doorways, leaded to the church inner rooms: the Northern Doorway of White Lions and the Southern Doorway of Red Lions. However, the interiors of the ancient church are also worth seeing. One of the walls is colored from frescos, dated of the 14th century and a unique altar cross of the same age.

Do you love Italian music? Basilica di Santa Maria Maggiore became the last home for the prominent Italian musician, a native of Bergamo – Gaetano Donizetti. The beautiful Capella di Colleone is adjacent to the main church building – the mixed sample of Gothic and Renaissance styles. The name of the Chapel became the name of the person, who ordered to build it in olden times.

That person’s name was Bartolomeo Colleoni, who decided to raise a beautiful chapel in the very heart of the city in honor of his dead daughter Medea. It is interesting that the prominent man was buried on the underground floor of the Basilica di Santa Maria Maggiore, but not in the chic chapel. So, the place is interesting for all history lovers. There are many ancient secrets that were buried here.

Any way, you slice it, the main city sights are situated in the oldest part of Bergamo – Piazza Vecchia. The most unusual building you can meet there is the building of the Old Statehouse (Palazzo Vecchio). Actually, this is the oldest municipal institution of Italy. There is also a New Statehouse, where the famous library Angelo Mai is situated.

All buildings were raised in Renaissance style. The most beautiful of them is Torre Chivika, dated of the 11th-12th centuries. The center of the square is decorated with a big fountain in the form of sphinx, built in the 18th century by Venetian governor.

As you can see, Bergamo is an amazing and historically valued place. The best way to meet and learn everything around is hiring a car. Bergamo is the most beautiful city in the whole Lombardy, situated not far from Milan and offering the wide opportunities for having rest at all times and seasons.

There is nothing more important than a comfort travelling, planning your routes on your own, based upon your thoughts and interests. Rental car services can help. Travelling in Bergamo, forget about the traffic jams and the high prices for parking. Everything is perfect, suggesting you for making trip right now!

Moreover, exploring everything in Bergamo, do not forget about the suburbs and the cities around. Having a car, this is not a problem for you to change the historical Bergamo sights for charming shopping in Milan or romantic places of Verona. Let your possibilities to be always open-ended, and infinite with a good rental car service. Stay always a head of the times!

Author Bio: Lily Berns tries to provide readers with useful info regarding their holidays. She likes to find special places for pleasant travel by car in Italy.