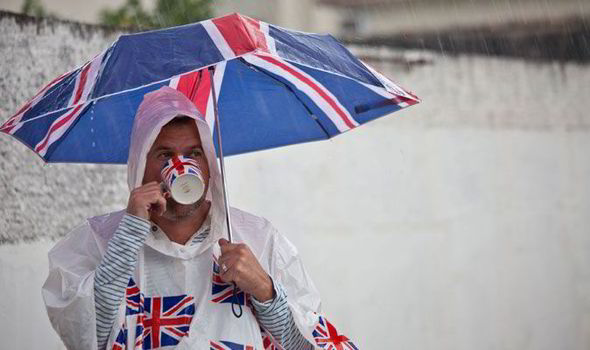 After the initial quiet start to British life after the Brexit vote, July 28th began to show signs of negativity as the effect of the UK’s decision to leave the EU began to hit the economy.

Three influential studies released in July 28th have stated that Britain’s car industry, building companies and retail sectors are now all facing worrying times ahead post Brexit. The society of motor manufacturers and traders have reported that its members were feeling the fear surrounding the Brexit vote, especially in regards to growth prospects, jobs and investments in the UK economy.

Similarly, leading lettings and sales estate agent group Countrywide have also today issued warnings that the countries property markets are weakening since the referendum. With over 50 high street brands at their disposal, Countrywide admits that profits for this year will certainly be lower than in 2015 and lays the blame firmly at the feat of the UK’s decision to leave the EU.

Insolvency company MGJL have stated that;

The uncertainty caused by the Brexit vote has certainly had a knock on effect to various major employers in the UK, Lloyds are more than likely expecting a further period of low interest rates as the government seeks stability in the light of the vote, which will impact on profitability, Rolls Royce were already implementing a turnaround plan, but the sudden drop in the pounds value against the dollar will have had a negative impact on this.

Countrywide have stated that there was a clear market slowdown in May and June as well as a commercial and London residential stall since the vote. The number of homes sold are subject to contract in London fell 29% in April to June when compared with January to March. Countrywide also reported a 25% tumble in adjusted pre-tax profits for the first half of 2016 and warned of turbulent times ahead.

Finally, today’s news has been topped off by Lloyds Banks decision to axe 3000 jobs and close 200 branches across the UK following a period of uncertainty caused by Brexit. The Guardians business editor Jill Treanor explained;

The bank is blaming changes to customer behaviour and anticipated cuts to interest rates following the vote for Brexit last month. Mark Carney, the Bank of England governor, signalled a rate cut would take place during the summer and the City now expects rates will be cut from their 0.5% historic low on 4 August.

The City of London expects to see rates cut down to 0.5%, a historic low on the 4th of August. The announcement came as the bank revealed it was being investigated by the Financial Conduct Authority for its handling of customers who are struggling to pay their mortgages. They also blame the job cuts and branch closings on changing customer habits as more customers’ bank online.

With todays reports we can begin to see the changes and challenges that will be facing the UK in the coming months and years. Although we Immediately saw, post vote, a decline in the value of the pound, what is clear is that the real damage will become apparent over the next months and years as the country struggles to adapt to the complexity of life outside of the EU.